A road trip to Maithon Dam

We took a trip to Mukutmanipur, in the state of Bengal, India and by the seven Gods, it was by far the best place I have driven to, in  my life. It’s absolutely mesmerizing, this place and a driver’s heaven. A partially restricted road (in the sense that you have to take permission to drive on it and you are allotted a fixed amount of time to stay on) stretches to 3 kms or maybe more, and is absolutely empty save for a few bicycles or motorbikes here and there. I topped out my engines on that road.

We started pretty early in the day (or shall i say night) at 2 AM. Taking a friend with me who lives in the neighborhood and from there we went to pick up a friend who lives about 17 kms away. It was 15th of February and we were trying to have some fun after the sullen mood of being single on valentine’s day.

The weather was pleasant that night, with cool winds blowing at our faces. We took a break from the drive to drink tea on the Belgharia expressway (part of the Asian Highway – 1) while on the way to Sam’s house. Starting from there I realised we were running low on fuel. We planned to refill on the way, but as fate would have it, all the gas stations were closed. When I picked up Sam, the fuel gauge needle was almost touching the Empty scale. We opened google map to check for any nearby gas station but none of them were open at the time. We did find an open one on the map, good thing, it was on our way, but the bad thing, it was almost 30kms away. That meant, I had to drive at a sweet pace so as to conserve fuel as much as possible. Fortunately a few days earlier, I had watched a video where they showed that a car engine is most fuel efficient when running at 40-60 kmps, and that’s the route I took. In the end we did manage to reach the gas station and filled the tank to the brim.

At around 6 am, we stopped for breakfast. By this time, the distant landscape on the side of the road was covered in a thin blanket of fog and it was 10 degrees outside with a chilling wind blowing. We sat down for a cup of tea and since the shop owners hadn’t made anything yet, we ate some leftover fries from last night, it was not the best thing I have tasted but it was enough for us hungry souls.

When we started from there, in fifteen minute or so, some gunk started appearing on my windshield. It took me a while to recognize that it was bug splatter. But i continued on thinking the wiper will take care of it. And I have never been so wrong before, apparently we were crossing a horde of migrating bugs if you can call it that and it hit us bad. In a matter of seconds, there were thousands of bugs on my windscreen reducing visibility to almost nil. I parked my car on the side of the road and got out to clean it with water and a towel. I wasn’t ready for what sight beheld itself. The whole front of my car, and anything that faced forward was smeared in green layer of bug carcass and it was stinking of death, literally. I braved myself to clean it all up, using up to two towels in the process and a big bottle of water we had bought to drink on the way. However that was the last of the bug.

The rest of the journey was very pleasant, with Sam’s joke making us laugh every minute of it. The road became empty as we approached a forest, called the elephant corridor. My friends say they saw an elephant deep in the forest but I don’t believe them.

We reached our destination at around 11am. There was a short bridge over an abandoned dam which connected two banks of the Kansabati river. Near the bank of it, was a park under construction. We were quite disappointed at what we saw. There was nothing to do other than stare at an almost dry river with a rocky bank. If only there was a way to climb down on those rocks. Near the park there was an unpaved path, I decided to follow it and see where it led to. We walked for what seemed like an eternity, and it was beautiful to look at as we progressed further. The path was cut out in between a hill with both sides towering above us and covered in thick cobwebs. A canopy of green trees played hide and seek with the sun as we walked by until we reached an abrupt end what seemed like a cliff. But as Sam pointed out, we could climb down to the rocks from there. Any sane person at that point would have just turned back and walked to the car, but we are not exactly sane. We climbed down an almost vertical wall of rocks all the while thinking how difficult it will be to climb back up, onto a bed of sharp uneven ground of eroded bare rocks, sticking out in a diagonal way. It was tough to even stand properly on those ground let alone walk and the thorny vegetation poking out from the ground hindered us from using all four to navigate. However we did manage to walk around with difficulty and it was absolutely amazing to just sit on the rocks and enjoy the cool wind. Here are some pics.

We drove further from there, after resting a bit and washing ourselves, only to have to come back to take permission to be able to continue to do so. It took us around quarter of an hour to get the permission and we were on our way to one of the most beautiful places I have ever driven on.

Driving on, the ground to our left started giving way to a lake with water meeting the sky in the horizon.

We stopped for a while to enjoy the beauty of the crystal clear lake water. We wanted to take a bath but weren’t prepared with towels or anything of that sort. Maybe next time! 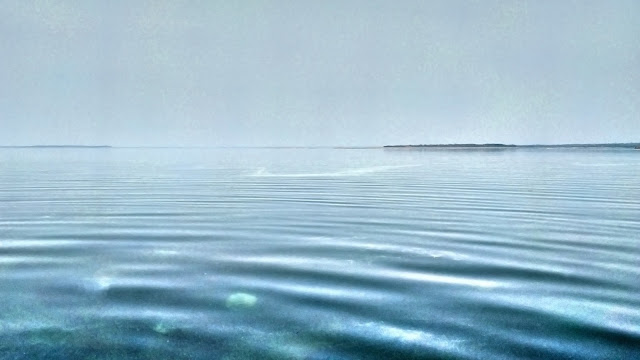 There was a small park nearby, a little elevated ground, turned into a place to sit and relax (unfortunately it never occurred to us to take a photo of it). I climbed on top to take these beautiful shots of the road stretching to and along the horizon along the bank of an unending lake.

By the time we were done here, it was 4 pm and we were hungry as it gets. We filled our empty stomach with loads of rice and fish in a local dhaba and was on our way home.

All photos are taken by Google Pixel™
Edited by Disha Shur